Joint call to action: LGBTIQ* rights at risk in Poland! – NELFA, ENP and the European Forum of LGBT Christian groups demand a clear reaction from the EU 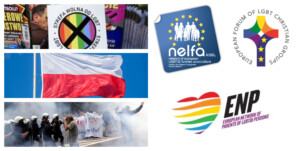 Within the past few months Poland’s LGBT+ community has experienced many acts of hostility, aggression and discrimination on an unprecedented scale. The ruling Law and Justice party (PiS) is using the o-called “LGBT+ ideology” in the ongoing election campaign as a tool to polarise the society and win support of the homophobic right wing very conservative Christian electorate. Four provinces, nine counties and several municipalities (in the south and east of the country) have adopted resolutions opposing the “LGBT ideology”, and more governments are preparing similar documents. The equality march in Białystok on July 22nd was attacked by hooligans and Neo-Nazi supported and, in a few documented cases, coordinated by local PiS politicians, and praised by local priests. There were insults (“fuck out” and “to gas”), spitting, throwing flares and bottles, beatings (including teenagers).

Some days before, Gazeta Polska – a conservative weekly and supporter of PiS – issued “LGBT-free zone” and “LGBT-ideology free zone” stickers. Meanwhile, the District Court of Warsaw ruled that the paper must stop the distribution (due to a pending case brought by a Polish citizen). But the ones that were sold are in use, shops put them on a display.

“Hostility towards non-heterosexual minorities is explained as protection against child demoralisation and paedophilia, and degradation of family values. The ruling party’s present strategy is to officially condemn acts of aggression, but at the same time to deny any agency in the events taking place and to do nothing to prevent them in the future. […] With no legal protection and overt hostility towards LGBT+ which is now escalating, Polish LGBT+ families with children are under pressure to either live in fear and in the hiding or emigrate.”

The EU is based on human dignity, freedom, democracy, equality, the rule of law and respect for human rights, including the rights of persons belonging to minorities. The Commission is the guarantor of these values. Therefore, we expect a clear stance on the matter. Read the full letter here.

The European Network of Parents of LGBTI+ Persons (ENP) is an umbrella organization for Associations of Parents of LGBTI+ persons; as well as for parents who do not form part of an association. This Network gathers families that aim toward a more inclusive society; families that recognize that all persons should be treated with dignity and respect – free from any form of discrimination or oppression. ENP is a non-religious, non-partisan and non-profitable organisation that includes parents from all walks of life with a wealth of resources available to act as catalysts in building a safe and fair society. https://enparents.org/