Advancing the rights of rainbow families! – NELFA urges the European Union to take further action against the discrimination of LGBTIQ* parents and their children 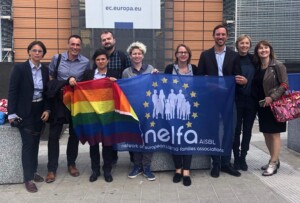 The Network of European LGBTIQ* Families Associations, NELFA, welcomes the recent efforts of the European Union to advance LGBTIQ* equality in 2020 and beyond. At a high-level conference of the Finnish Presidency of the Council of the EU in Brussels, activists have claimed on a clear EU LGBTI strategy. NELFA itself had the possibility to hold a keynote speech in a workshop about LGBTIQ* couples and families in cross-border situations. In addition, we raised awareness about current legal struggles and made some suggestions how to ensure the equal treatment, recognition and protection of (children in) rainbow families. NELFA’s keynote, NELFA’s wishlist, NELFA’s cross-border presentation.

NELFA’s President, Eleni Maravelia, says, “Many LGBTIQ* parents and especially their children are still deprived of their rights within the EU. Discrimination and hostile attitudes against rainbow families are reality in a lot of Member States and the situation gets worse whenever these families are crossing borders. Legally established familial ties just disappear because of incompatible laws and regulations, the families are put in jeopardy. And the only reason is the gender identity or sexual orientation of the parents. This is a breach of the Fundamental Rights Charter which was signed by the Member States ten years ago.”

NELFA’s Vice-President, Björn Sieverding, adds, “Indeed, the EU has only shared competences in family law. But as guarantor of the Treaties, the Commission should do everything possible to better the situation for rainbow families. It might begin with research activities and adequate space for a steady and purposeful dialogue between the Member States. Furthermore, we see the need to review the EU free movement provisions [Directive 2004/38/EC], to make them meaningful and inclusive for rainbow families. The most important step could be the mutual recognition of the content of civil documents related to familial ties. And above all should stand the well-being and best interests of the children.”

NELFA is the European platform of LGBTIQ* families associations, bringing together LGBTIQ* parents and parents-to-be from all over Europe. NELFA currently represents 38 organisations in 31 European countries with more than 20,000 members. NELFA is a member of ILGA-Europe, Transgender Europe and COFACE Families Europe. Website: http://www.nelfa.org. Leaflet: http://bit.ly/2rJW0us. Newsletter: https://bit.ly/2Ppsxlf.