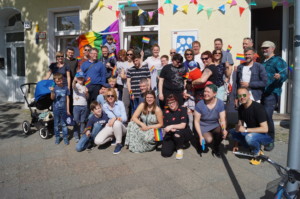 Last weekend, LGBTIQ* parents and their children from all over Europe gathered together for a cosy meeting in Berlin, including a Welcome Party at the Rainbow Family Centre in Schöneberg and a Boat tour on the river Spree. The whole event was organised by the Network of European LGBTIQ* Families Associations, NELFA, and its member organisation LSVD (Berlin-Brandenburg). The families and allies came i.e. from Austria, Belgium, France, Italy, Spain, Croatia, Denmark, Poland, Luxembourg and Germany and enjoyed the time spent together. The children played a lot on the nearby meadow; the parents shared their experiences as rainbow families and the specific circumstances in their home countries.
Special guest was the co-chair of the European Parliament’s Intergroup on LGBTI Rights, Terry Reintke (Greens/EFA), who highlighted the common goal to better the situation for thousands of rainbow families within the EU who often suffer from discrimination.
NELFA-President Dominique Boren says, “When we consider the rights of LGBTIQ* parents and their children, Europe is still a giant patchwork. Indeed, we have marriage equality in a range of states, joint adoption rights or free access to medically assisted procreation in some countries. However, this is not enough! Especially in Eastern Europe and in the Balkans, rainbow families face a substantial lack of recognition, protection and acceptance. Legislative loopholes exist everywhere, freedom of movement is still not guaranteed at all. This creates major problems and affects in the end the well-being of our children!”
Stephanie Wolfram, new director of the LSVD Rainbow Family Centre adds, “One reason for the meeting was to celebrate the International Family Equality Day 2018, which will officially be held on the 6th of May under this year’s slogan: ‘Children’s Rights Matter’. We want to show, rainbow families are everywhere and we are proud to live as rainbow families. We are standing up together for our rights and the rights of our children. Rainbow families still get treated unequally in many ways, they are excluded or ignored at times – at some places even hated and persecuted. It´s time for a change. Stop the exclusion of LGBTIQ* parents and their children from benefits other families already enjoy!”
About NELFA:
NELFA is the European platform of LGBTIQ* families associations, bringing together LGBTIQ* parents and parents-to-be from all over Europe. NELFA currently represents 30 organisations in 19 European countries with more than 20,000 members. NELFA is a member of ILGA-Europe, Transgender Europe and COFACE Families Europe. Website: http://www.nelfa.org. Leaflet: http://bit.ly/2rJW0us. Newsletter: http://bit.ly/2Fcn5c5.
Further contacts:
Dominique Boren (NELFA President): +33 630 49 66 62
Giuseppina La Delfa (Vice-President): +39 393 39 63 733
Share this
0 likes
Related Articles