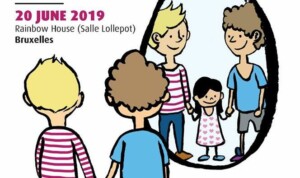 Tanja Vuckovic Juros’ TransNorm project focuses on LGB migrants living across two worlds, one in which they can have legally protected families (Belgium and The Netherlands) and one in which that protection is absent (Bulgaria, Croatia, Hungary, Poland and Slovakia [Central and Eastern Europe – CEE]). Her qualitive interviews with LGB migrants, their parents and siblings give exciting insights. For example, that the birth of children changed a lot in a positive way while same-sex marriage was sometimes more difficult to accept.

PhD Tanja Vuckovic Juros sums up, “People may change their views on family through exposure to possibilities that were not imaginable before. But this conclusion also warrants one important remark. There is no point in waiting for the ‘people to become ready’ to change exclusionary laws and institutions. These two things come together. The only way to move forward, then, is to create and support laws and institutions that fully recognise and protect non-heterosexual families, wherein individual prejudice is no longer implicitly supported.”

Salvatore d’Amore’s recent study (et al.) is entitled “Attitudes towards rainbow couples and families across seven European countries”. The sample involved more than 13.000 participants (students who identify themselves as heterosexual; from Belgium, France, Greece, Italy, Poland, Portugal and Spain). They were asked about their opinions about lesbians and gays (LG), same-sex marriage and parenting. One result is that greater religiosity and more traditional ideas about gender roles were associated with less supportive attitudes.

Prof. Salvatore d’Amore states, “More positive attitudes came with a greater satisfaction in relationships with lesbian and gay people in one’s social network, means: the quality of those relationships was paramount. To increase heterosexual’s support of equal rights, community institutions (schools, colleges, universities, religious communities) should create more opportunities to interact with openly LG people and have positive experiences with them.”

Both studies were presented at an event in Brussels on 20th of June 2019, co-organised by Tanja Vuckovic Juros, Homoparentalités and NELFA (Rainbowhouse, Salle Lollepot).