NELFA meets UN-SOGI expert at the first historic public consultation on civil society: together, side by side for the best interest of the child. 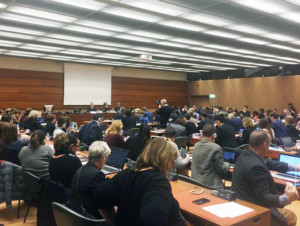 The Network of European LGBTIQ* Families Associations, NELFA, is delighted by the first meeting with Mr. Vitit Muntarbhorn, the new U.N. Independent Expert on protection against violence and discrimination based on sexual orientation and gender identity. During the consultation with civil society activists at the United Nations in Geneva, at which NELFA participated, he pointed out the challenges which would also improve the well-being of rainbow families all around the world: decriminalisation, de-stigmatisation, legal recognition of gender identity, cultural inclusion with gender-and-sexual diversity and empathisation. Muntarbhorn is looking forward to a controversial but “friendly dialogue”.

NELFA’s President, Maria von Känel, says, ‘Very important for me was Vitit Muntarbhorn’s comment with regard to possible reservations against the recognition and acceptance of family diversity. The best interest of the child and not of the adult should be paramount. As an independent expert, he recommends focusing on the children’s rights: non-discrimination, private and family rights and freedom of movement. A wise message!’

Luís Amorim, Vice-President of NELFA, adds, ‘Vitit Muntarbhorn wants to draft a first work report in March to make the challenges “globally transparent”. He invites us to provide more information. And it is obvious that we will take part in this discourse, with best practice examples and the wide range of scientific research. It’s been proven that the sexual orientation and gender identity of the parents does not make any difference for the well-being of the children.’

About NELFA: NELFA is the European platform of LGBTIQ* families associations, bringing together LGBTIQ* parents and parents-to-be from all over Europe. NELFA currently represents 32 organisations in 19 European countries with more than 26,500 members. NELFA is a member of ILGA-Europe and Transgender Europe.

Get involved in the International Family Equality Day (IFED): www.internationalfamilyequalityday.org