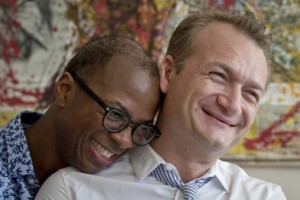 The Network of European LGBTIQ* Families Associations, NELFA, is very pleased with the judgement in the so-called “Coman case”. The Court of Justice of the European Union (CJEU) had to interpret the word “spouse” in the context of EU law on freedom of movement (Directive 2004/38/EC). The judges clarified that same-sex spouses are included in the definition of the term: same-sex spouses have equal rights to reside in EU Member States. This is a fundamental backing for rainbow families in the European Union!
Eight years ago, Adrian Coman and Clai Hamilton were married in Belgium and their legal struggle to be recognised as a family in Romania has been going on for over five years. Supported by LGBTIQ* NGOs, the couple filed a complaint against the Romanian government in 2014. The case reached the Constitutional Court of the EU Member State in 2016 and was first discussed at the CJEU in Luxembourg in November 2017.
See the full judgement here: https://bit.ly/2xFgV50
NELFA-President Dominique Boren says, “The freedom of movement within the EU is not only a promise, it is a fundamental right, one of the basics of the whole Union. Unfortunately, a lot of rainbow families still can’t cross borders without losing their rights – 14 years after the approval of the corresponding Directive. The current judgement in Luxembourg should encourage the EU Commission to work harder against the ongoing discrimination of LGBTIQ* parents and their children. National governments need to accept legal documents which were already decreed abroad – from marriage contracts to birth certificates.”
NELFA’s Vice-President Giuseppina La Delfa adds, “We warmly congratulate Adrian and Clai – a lot of rainbow families can sympathise with their situation. My wife and me, for example, we had to wait for years to be recognised as a married couple – at first in our home country France; then in Italy, where we live. The birth certificates of our children – containing both mothers – were approved in Italy only last week, after a legal fight of four years. Such a struggle should be impossible in the future. It is a question of respect and dignity!”
About NELFA:
NELFA is the European platform of LGBTIQ* families associations, bringing together LGBTIQ* parents and parents-to-be from all over Europe. NELFA currently represents 31 organisations in 19 European countries with more than 20,000 members. NELFA is a member of ILGA-Europe, Transgender Europe and COFACE Families Europe. Website: http://www.nelfa.org. Leaflet: http://bit.ly/2rJW0us. Newsletter: https://bit.ly/2sFcqBO.
Further contacts:
Dominique Boren (NELFA President): +33 630 49 66 62
Giuseppina La Delfa (Vice-President): +39 393 39 63 733
Photo: Vadim Ghirda/Associated Press
Share this
0 likes
Related Articles