Italy: first recognition of two gay fathers! – A landmark judgment by the Court of Appeal of Trento. 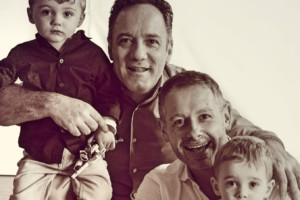 The Network of European LGBTIQ* Families Associations, NELFA, is very pleased with the recent judgement (23rd February 2017) of the Court of Appeal of Trento that became public this week. It recognised to full effect a Canadian ruling that established an intentional father to twins born through surrogacy to be the legal father. It is the first time in Italy that two men are fully recognised in their parental roles. Alexander Schuster, the Italian lawyer that assisted the couple from the very beginning of their parental journey in 2009, reports that the fathers were completely overwhelmed when he personally handed them over the judgement last week.
Alexander Schuster, who is also working for NELFA’s member organisation ‘Famiglie Arcobaleno’, says, “On one side, the decision clearly affirms that under Italian law parenthood does not need to rely solely on biology. The intention to become a parent establishes a fully-fledged parenthood. This principle applies to everyone, for example to straight and gay couples alike. On the other side, it also rejects the idea that men cannot cater for the love and care that children need. It is an important step towards gender equality.”
NELFA’s President, Maria von Känel, adds, “The ruling finds that foreign surrogacies bear no meaning on the protection that a child deserves and that there should be no obstacle in giving full faith and credit to foreign decisions and birth certificates. Unfortunately, this is not a commonly widespread yet. Once more, a court had to decide what authorities previously had been rejecting for many years. Finally, after seven long years, we have a happy ending!”
See an Italian press release and the link to the judgment (in Italian) on www.schuster.pro.
About NELFA: NELFA is the European platform of LGBTIQ* families associations, bringing together LGBTIQ* parents and parents-to-be from all over Europe. NELFA currently represents 32 organisations in 19 European countries with more than 26,500 members. NELFA is a member of ILGA-Europe and Transgender Europe.
Website: http://www.nelfa.org
Download our new leaflet: http://nelfa.org/wp-content/uploads/2015/09/NelfaLeafletUpdate2017-02.pdf
Get involved in the International Family Equality Day (IFED): www.internationalfamilyequalityday.org
Download our recent NELFA Newsletter: http://bit.ly/2ma2zCP
Further contacts:
Maria von Känel (NELFA President): +41 79 611 06 71
Alexander Schuster (Law firm, Trento): +39 0461 935257
Share this
0 likes
Related Articles