Referendum in Romania: It’s an attack against all families! – NELFA supports the boycott of the upcoming plebiscite on 6th and 7th of October 2018 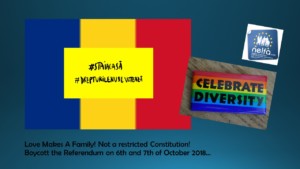 The Network of European LGBTIQ* Families Associations, NELFA, is extremely worried about the referendum on changing the definition of the term ‘family’ in the Constitution of Romania (Article 48.1). If successful, the initiative will replace the current neutral definition with a version that recognises only married different-sex couples as the basis of a family. This excludes – from constitutional protection – all other formats of families, not only rainbow families, but also i.e. grandparents raising grandchildren, single parents, and multi-generational families. Therefore, NELFA supports the boycott of the popular vote.

NELFA-President Dominique Boren says, “The referendum is not only about a constitutional ban on same-sex marriages – it is a broader family issue! The false narrative being propagated frames the LGBTIQ* population in Romania as the ‘other’, a threat to ‘traditional values’, and increases the marginalisation and vulnerability of the community. Together with its allies, NELFA wants to emphasise the true nature of the vote: as an attack on all families, an infringement on the human rights and liberties of people in Romania!”

NELFA’s Vice-President, Giuseppina La Delfa, adds, “The Romanian government even issued an emergency ordinance declaring that the referendum would take place over two days, instead of the one day that is usual procedure. This – to prolong the voting period and to increase the likelihood of the threshold being met – is a clear attempt to influence the outcome by bending the rules of the state for its own purposes. This is why we are calling for a boycott. If enough of the electorate can be persuaded not to cast a vote, the referendum will fail and a strong message will be send that the people have no interest in supporting discrimination!”