A leap forward for rainbow families in Eastern Europe and the Balkans! – NELFA welcomes new member organisations in Poland and Western Balkans/Turkey 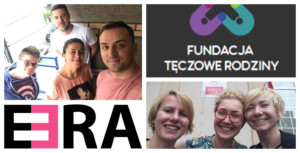 NELFA-President Dominique Boren says, “The increasing backlash in Europe against LGBTIQ* people is a thread, especially for rainbow families. The well-being of our children is at risk due to hate speech, ignorance and mockery. They need strong partners, visible allies who fight for their rights – for more recognition, protection and equal treatment. The growing support for NELFA and the new cooperation with FTR and ERA are soothing signs!”

ERA-Co-chair Amarildo Fecanji states, “Rainbow families exist all across the Western Balkans and Turkey and we are confident they will only continue to grow. Unfortunately, with the exception of Croatia and Slovenia, in no other country are family rights of same-sex couples recognised. Many of our member organisations are fighting for same-sex partnership law as an important milestone in the right direction. Therefore, our membership in NELFA is important so we further strengthen links and coordinate efforts if and when possible.”

FTR-Board member Joanna Śmiecińska adds, “Our main aim is to ensure that rainbow families, and most importantly, children raised in them are safe and live to the full potential. To achieve these goals, rainbow families need to be recognised and socially integrated with the local communities. In present day Poland we cannot rely on any legal solutions benefiting LGBTIQ* people, let alone rainbow families, still, through cooperation with local governments and, above all, through common actions of NGOs a lot can be done even in adverse conditions. We appreciate the possibility of exchanging ideas and cooperating with other rainbow family organisations and we are extremely glad to be part of NELFA!”