Fundamental rights are not negotiable: Freedom of movement for rainbow families within the EU! 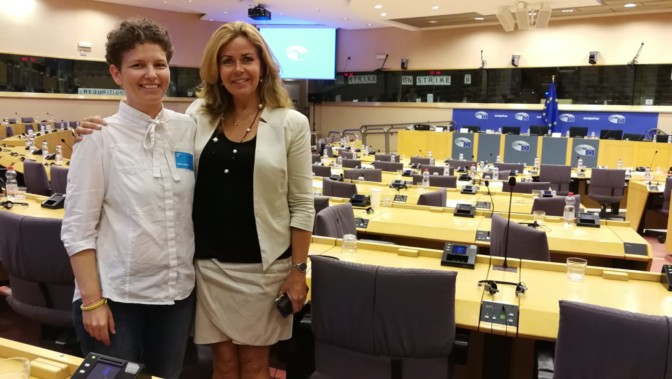 The Network of European LGBTIQ* Families Associations, NELFA, is full of hope after a very successful presentation in a meeting of the EP’s Committee on Petitions. Board member Eleni Maravelia, a Greek national living in Spain, reported on her own experiences with the non-acceptance of legal documents which were already decreed in another Member State. In her case, the obstacles with a birth certificate could have been even life-threatening.
See the meeting here (corresponding case from 17:46:39): https://bit.ly/2ztjbNy.
The Committee’s Chair, Cecilia Wikström, promised to send a letter to Greece, to push the European Commission in this question (i.e. through a written reply with regard to the recent CJEU Coman case ruling), to take action together with the EP’s Intergroup on LGBTI Rights (a public event) and to ask the presidency of the Council of the EU for possible further steps. The freedom of movement of EU citizens and their family members is regulated in a Directive of 2004. But, until now, the very different recognition of LGBTIQ* parents and their children in national laws creates major problems. Crossing borders often means: losing rights.
Eleni’s first daughter was born in Spain. Her birth certificate names two mothers: Eleni from Greece and her partner from the UK. To get a Spanish passport, the daughter needed a proof of a British and/or a Greek nationality. But, at that time, both countries didn’t accept the birth certificate because of the child’s same-sex parents. This legal limbo took a new meaning when the daughter was diagnosed with cancer. Eleni and her wife couldn’t travel with her because of the missing passport. Luckily, her daughter beat cancer thanks to doctors in Spain. And –because of the illness – a civil servant “turned a blind eye” and transcribed the certificate at least partially, with Eleni as mother. Her partner was not included.
Eleni Maravelia said before the Committee, “My children still cannot enjoy the rights other children have, just because of their two lesbian mums. The feeling among rainbow families is that we are second-class citizens. I understand that family law is competence of the Member States but the EU cannot sit back while its citizens are facing discrimination because of their sexual orientation and children are denied their right to family life. I hope that the Parliament would take my petition under serious consideration, so a change in EU law can be implemented soon. Bear in mind: LGBTI rights are human rights!”
Eleni Maravelia met up with various MEPs during her visit: i.e. Dimitrios Papadimoulis (GUE/NGL), Ernest Urtasun (Greens/EFA) and Miltiadis Kyrkos (S&D). They were all very supportive of rainbow families’ rights and promised to keep the momentum going.
NELFA is especially happy that the Committee’s Chair, Cecila Wikström, stated, “This petition is one of those that we [The PETI Committee] can really make the difference”.
Finally: A big THANK YOU goes to NELFA’s member organisations FLG in Spain and Oikogeneies Ouranio Tokso in Greece for their support and help.
About NELFA:
NELFA is the European platform of LGBTIQ* families associations, bringing together LGBTIQ* parents and parents-to-be from all over Europe. NELFA currently represents 31 organisations in 19 European countries with more than 20,000 members. NELFA is a member of ILGA-Europe, Transgender Europe and COFACE Families Europe. Website: http://www.nelfa.org. Leaflet: http://bit.ly/2rJW0us. Newsletter: https://bit.ly/2sFcqBO.
Further contacts:
Eleni Maravelia (NELFA Board member): +34 666 862 034
Dominique Boren (NELFA President): +33 630 49 66 62
Share this
0 likes
Related Articles