Romania: The failed referendum should be a turning point! – NELFA demands new legislative efforts to recognise rainbow families in the country 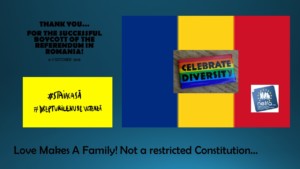 The Network of European LGBTIQ* Families Associations, NELFA, is very pleased with the outcome of the recent referendum in Romania on 6th and 7th of October. The aim was to redefine the term “family” in the constitution as “union between man and woman” only and to replace the current neutral version “between spouses”. But the plebiscite failed: data from the national election bureau showed voter turnout stood at 20.4 % when the polls closed, below the 30 % required for it to be valid. The boycott of the referendum was successful.

NELFA-President Dominique Boren states, “This is definitely good news! Romanians rejected being divided and infringed, it is a victory for democracy and a brief respite for many brave activists in the country. Their tireless fight for more recognition, protection and equal treatment of LGBTIQ* people and their children will and must go on. Same-sex marriage for example is still prohibited in Romania; homo-, bi- and transphobia remain at a high level. The failed referendum should be a turning point. It is desperately needed that Romanian legislation finally complies with Human Rights standards and EU values!”

NELFA’s Vice-President, Giuseppina La Delfa, adds, “Rainbow families in Romania have experienced an emotional roller coaster ride within the last months. One the one hand: public hatred and scorn against the LGBTIQ* community – backed by the government and Church officials. On the other hand: the successful judgement in the Coman case after which residency rights of same-sex spouses must be respected under the EU’s freedom of movement rules. Hopefully, we’ll see now much more efforts to respect the diversity of life plans. Constitutional restrictions of the term ‘family’ are simply a rejection of reality!”