Rainbow families in Europe: Children’s rights first! – NELFA’s new Board sends out a firm demand for more equality after its AGM in Helsinki (09 March) 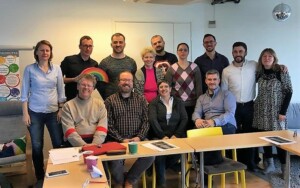 The Network of European LGBTIQ* Families Associations, NELFA, calls on all decision-makers concerned to respect the private and family life of children in rainbow families and to ensure their full protection. This is one of the main messages from the Annual General Meeting in Helsinki, especially pointed out by the newly elected Executive committee.

NELFA’s new President Eleni Maravelia says, ‘I am very excited to be heading a Board made up of diverse activists from the East and West of Europe. Together we are going to work towards securing and protecting the rights of children in LGBTIQ* families. NELFA’s aim is to ensure that they are treated equally to others and don’t face any kind of discrimination, only because of the sexual orientation or gender identity and expression of their parents.’

NELFA’s new Vice-President Björn Sieverding adds, ‘Unfortunately, many children in rainbow families are still deprived of their rights. Due to a lack of adequate laws and regulations, they often can’t maintain a legal relationship to both of their parents. Even if those ties are granted in one country, children may lose them when crossing a border. We see here a clear breach of European values and EU law. NELFA will continue to address this, especially to the renewed EU Parliament and Commission after the elections in May.’

The whole weekend in Helsinki was hosted by NELFA’s member Sateenkaariperheet ry. The Finnish Rainbow Families organisation had inter alia invited to a children’s rights seminar. The next Annual General Meeting of NELFA will be held in Poznań, Poland (March 2020).

NELFA is the European platform of LGBTIQ* families associations, bringing together LGBTIQ* parents and parents-to-be from all over Europe. NELFA currently represents 34 organisations in 28 European countries with more than 20,000 members. NELFA is a member of ILGA-Europe, Transgender Europe and COFACE Families Europe. Website: http://www.nelfa.org. Leaflet: http://bit.ly/2rJW0us. Newsletter: https://bit.ly/2Ppsxlf.