Rainbow Europe 2019: Against the backlash! – NELFA will continue to fight against prejudices and disadvantages of LGBTIQ* parents and their children 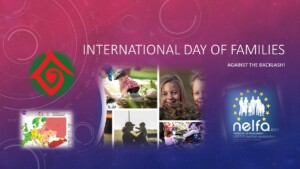 The Network of European LGBTIQ* Families Associations, NELFA, is worried about the recent findings of the Rainbow Europe 2019 survey, just launched by ILGA-Europe. It reveals – for the first time in the last ten years – a visible backslide on laws and policies safeguarding equality and human rights for lesbian, gay, bisexual, trans, intersex and queer (LGBTIQ*) people. This strongly affects rainbow families: Poland for example no longer provides access to medically assisted reproduction for single women. In general, there is still a significant lack of legal recognition and protection for LGBTIQ* partners with children. You can find the recent Rainbow Europe results here: https://bit.ly/2WIteFE

NELFA President Eleni Maravelia says, “Today is the International Day of Families, proclaimed by the United Nations in 1993. It provides an opportunity to promote awareness of issues relating to families. NELFA tries to make clear on this occasion that the well-being of our children depends – to a high extend – on the equal treatment through adequate laws and regulations. It is just unacceptable that countries even water down their provisions for rainbow families. We need to continue the fight against this backlash in Europe!”

NELFA Vice President Björn Sieverding adds, “Most recently, we had a Rainbow Families Conference in Zagreb. It was organised by Dugine obitelji, the Rainbow Families Organisation in Croatia. The presentations and discussions during the weekend manifested the difficult situation for many LGBTIQ* people and their children, especially in the Balkans. Same-sex couples and families often face open hatred, contempt or ignorance. But activists in Croatia and the neighbouring countries stand side by side to challenge this. And NELFA will give additional backing, i.e. by reaching out to possible allies all over Europe.”