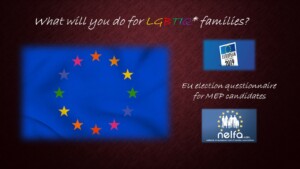 The Network of European LGBTIQ* Families Associations looks excitedly to the upcoming election of the European Parliament from 23rd to 26th of May. Several thousands of MEP candidates are vying for their favour and – at the end – for one of the 751 seats (with UK) in Brussels and Strasbourg. And this in a time where LGBTIQ* rights are at risk…*

NELFA has only one direct recommendation: Vote! Vote for human rights, the non-discrimination of LGBTIQ* people and their children, a real freedom of movement within the EU and more efforts to overcome prejudices and to promote social inclusion.

NELFA’s President Eleni Maravelia says, “In the past, the European Parliament was already an engine for LGBTIQ* rights. A vast majority tried to extend the legal recognition of rainbow families, especially in cross-border situations. Special thanks go to the EP’s Intergroup on LGBTI Rights for their steady support, and for pushing other EU institutions to take a clear stance for rainbow families. Unfortunately, we still face a lot of problems and the implementation of current EU laws and fundamental rights leaves much to be desired.”

NELFA’s Vice President Björn Sieverding adds, “We are very lucky to see that more than 1.400 MEP candidates all over Europe have signed the Come Out pledge of ILGA-Europe. Supporters of this great initiative promised to strengthen protection for LGBTIQ* people in EU law and policy and to ensure particularly that ‘freedom of movement is equally available to same-sex couples and their families, as confirmed by the Coman judgment’. We encourage all current and last-minute signatories to honour their commitment.”

In April, NELFA launched a little election campaign #VoteRainbowFamilies with a special questionnaire for MEP candidates. This survey will remain – also after the elections! More info and answers: http://nelfa.org/eu-elections/. See also the #ComeOut2Vote homepage of ILGA-Europe: https://www.comeout.eu/ and the results: https://www.comeout.eu/who-has-signed/. *LGBTIQ* rights are at risk? See ILGA’s annual benchmarking tool, the current Rainbow Europe 2019: https://www.ilga-europe.org/rainboweurope/2019